Violence is a broad term that describes any act, behaviour or comment that is sexual in nature that happened without consent.

Myth #1: Rapes are most likely to occur by a creepy stranger.

Fact #1: Only 10% of rapes are committed by strangers; 90% are known, and usually trusted by the individual.

Myth #2: Girls play “hard to get” and say no when they really mean yes.

Fact #2: If someone does not actually have a yes, proceeding is sexual violence.

Myth #3: If a girl was drunk or wore a short skirt, she deserved it.

Fact #3: It is never, ever the survivor’s fault. No one deserves sexual violence.

Myth #4: People lie about being raped because they regretted having sex afterwards.

Fact #5: The majority of sexual violence is committed by men against women, girls, boys and trans-identified. While less so, men are still targets of rape. Women have perpetrated sexual violence.

Myth #6: If two people have had sex together before, it is always OK to have sex again.

Fact #6: Nope. Nope. Nope. Consent needs to be active – therefore, in the moment and continual. 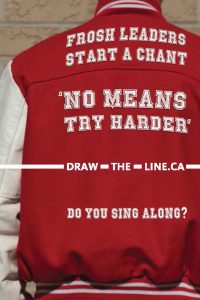 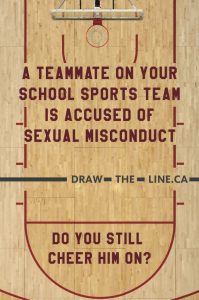 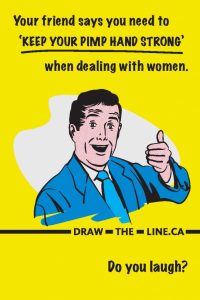 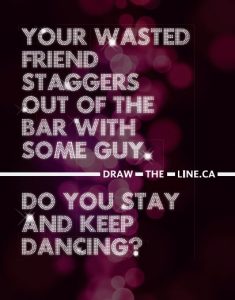 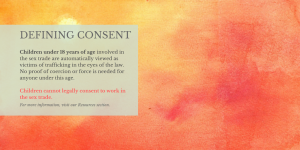 The filming, picture, possession, viewing, or uploading to the internet of sexual-content material of individuals under the age of 18 is guilty of an indictable offence.

What is exploitation?
Exploitation is defined by the Criminal Code section 279.04 which requires someone to fear for their safety or the safety of someone they know if they do not perform services requested.

Myth #1: If they willingly work in the sex trade, they are not a victim of trafficking.

FACT #1: Some may be manipulated into believing it is their only option.

Myth #2: It only happens to girls.

FACT #2: Although females make up a large percentage of victims, males can be exploited as well. The societal view that males are big and strong and can’t be victims makes it that much harder for males to come forward to report it. Often an exploiter will use psychological threats to control their victims.

Myth #3: They aren’t a victim if it’s their partner or a family member.

FACT #3: Many victims are lured by people they trust and love. Exploiters take advantage of this and may use emotional blackmail to keep their victims from leaving.

Myth #4: You can’t be exploited if you are sexually active.

FACT #4: Placing blame on the victim tells the exploiter they aren’t wrong.

Myth #6: They could leave if they really wanted to.

FACT #6: Often traffickers will use psychological tactics to maintain control over their victims, making them feel like it’s impossible to leave.

Anti-Human Trafficking Project
The main goal of the project is to develop a community response, referral and protocols to assist women and girls who are trafficked for sexual exploitation within York Region. Regional program, therefore our focus is York Region – however we hope that our initiatives will be transferable for other municipalities.
Goals & Objectives
Scope of the Project
Key Deliverables
Goals & Objectives

Preventing and Reducing the Trafficking of Women and Girls through Community Planning in York Region:

Scope of the Project